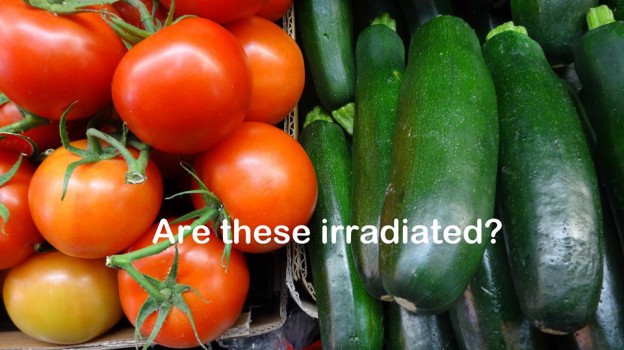 What is food irradiation? 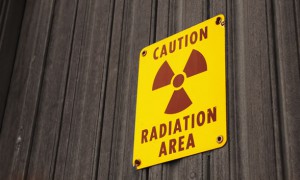 Irradiation is the process of exposing food ionising irradiation to intentionally alter some characteristics of the produce to achieve extended shelf life and/or pest destruction.

These doses are delivered by exposure to fuel rods containing Cobalt 60 from Canadian nuclear reactors. FSANZ acknowledges that irradiation changes the vitamin and nutritional content of food with the potential to create new chemical compounds within the food, which may not be naturally found. Ionising radiation by its nature changes the molecular structure of that which is exposed to it.

In Australia Irradiation approvals are given under Food Standard 1.5.3; irradiation is regulated as a food processing technique.

Why is irradiated food labelling being reviewed?

The original call for a “review” of mandatory labelling of irradiated foods came from Labelling Logic: Review of Food Labelling Law and Policy (2011) aka the “Blewett Report”.

False premise for Review: Recommendation 34 “that the requirement for mandatory labelling of irradiated food be reviewed” was premised entirely upon the notion of long-term experience with irradiated foods. “People have not had 30 years’ experience of irradiated foods and there appear to be no problems for humans occasioned by the consumption of food treated with this technology.” (pg 94.)

What is the Review aiming to do?

The “Review” process: Despite assertions that the consultation under way is not calling for legislative change, our understanding that is in really a litmus test for further action to remove labelling.

Indications from officials and Ministerial letters suggest that the outcome of this process will likely be cessation of the present requirement to label irradiated fruits and vegetables and other irradiated foods . The review document itself suggests that as labelling is seen as an impediment to the “uptake of the technology.”

The removal of mandatory labelling of irradiated foods is also likely to be considered a litmus test for the removal or lack of labelling other novel foods- foods using new technology – such as GMOs or Nanotechnology.

What about labelling in other countries?

Labelling is the global norm: It is clear that labelling of irradiated food is the norm. In fact, international standards, our trading partners, and the countries listed as examples in the FSANZ discussion paper, tend to have more stringent labelling regimes than Australia. They call for mandatory labelling – and, unlike Australia, include prescribed words clearly indicating that the product has been irradiated.

What’s being irradiated in Australia?

Recent approvals for commonly eaten fruits and vegetables significantly increase the proportion of irradiated foods in the average Australian and New Zealand diet, increasing the need for strong labelling laws.

It is clear that the industry is keen to increase the amount of food it irradiates and sees labelling as standing in the way to consumer acceptance.

The removal of mandatory labelling of irradiated foods is also likely to be considered a litmus test for the removal or lack of labelling other novel foods- foods using new technology – such as GMOs or Nanotechnology.

We cannot allow the government/our food regulator to collude with industry to keep us in the dark re irradiated or other novel foods. We must demand that mandatory labelling remain – and, in fact, be improved.

The page http://www.foodstandards.gov.au/consumer/foodtech/irradiation/Pages/default.aspx opens stating that irradiation is used in over 50 countries, has been used since the 1950s, is an alternative to pesticides and heat treatment and is safe and effective.

FSANZ: Dumbing-down science – telling half-truths – to promote irradiation:
It then likens ionising radiation to microwaves and fails to discuss the source or strength of gamma radiation used, rather describing the process in vague and an inaccurate fashion: “The rays pass through the food just like microwaves in a microwave oven, but the food does not heat up to any significant extent.”

This is a far cry from explaining to the public that, in fact, while the radiation exposure levels permitted vary according to the product and the purpose of the irradiation, fruits such as tomatoes and capsicums will be irradiated with anywhere from 150Gy to 1kGy, which is an equivalent to approximately 1.5million – 10,000,000 chest x-rays per exposure – calculated on the lower end of chest x-ray strength.

While there may be irradiation approvals in over 50 countries, the use of irradiation is not widespread, due to consumer resistance and availability of phytosanitary options.

Furthermore, despite irradiation technology being developed since the 1950s, claims of the safety of irradiated foods and “efficacy” of the process are unsubstantiated and unsubstansiatable – due to the fact that no long term consumption studies have been conducted.

Irradiation can kill or control some food-borne pathogens and is used for “microbial decontamination” even in Australia and as a biosecurity measure with animal-based (non-food products). Irradiation, however, cannot be a substitute for clean production and handling practices and is not recommended for regular use to “clean up”

In Australia Irradiation approvals are given under Food Standard 1.5.3; irradiation is regulated as a food processing technique.

End of production use of irradiation for “safety” purposes is not general supported in Australia.

The dosage approved for treatment of products not regulated as food (so could include animal feed, pet food etc) to address pathogens of animal biosecurity concern is 50kGy.

Food can only be legally irradiated for the purpose for which it has been approved. Irradiation for “safety” purposes – to control foodborne pathogens for example – tends to require higher doses of radiation exposure increasing risk of radiation induced nutritional depletion and the production of radiolytic products and other chemical changes.

To use food irradiation as a food safety measure would, therefore, require changes to the current approvals and further approvals to expose food to higher amounts of radiation. The higher the dosage, the greater the potential impact on food.

Cat food irradiation now banned in Australia due to illness in cats:
The Animal Biosecurity Branch of the Commonwealth Department of Agriculture confirms that: “In 2008-9, 87 cats in Australia were reported to have developed severe neurological disease (chronic leucoencephalomyelopathy) associated with eating an imported, irradiated dry pet food. The department … concluded that there was a reasonable body of evidence that gamma irradiation, applied as an adjunct quarantine treatment of pet food, was a contributing factor to the disease syndrome.”

Proponents of continuing the use of irradiation despite this, state that claim that the impact is species-specific AND that that cat food/pet food is irradiated at a higher dosage than food for human consumption.

A cause of great distress to the cat owners was the fact that laboratory research proving the potential for this impact existed but had been disregarded at the time by the parties involved. In its latest irradiation literature review, the European Food Safety Authority (ESFA) has not ruled out the potential significance to humans.

The irradiation of cat food is now prohibited in Australia and dog food requires irradiation labelling. To have lessor or no guidelines for labelling of foods for human consumption is incomprehensible and certainly deceptive to consumers who are aware of the cat and dog food situation.

Ultimately, however, “safety” of the process does not extinguish the public’s right to know about it or necessarily negate public concern. The public expects to be informed when a food has undergone processing and FSANZ has a responsibility to administer that. The current rules on irradiated food labelling should, therefore, be maintained and strengthened.